Sturgeon are types of bony fish with long spindle-like bodies and 5 lateral rows of bony armor plates called scutes. Similarly to sharks, they have a heterocercal caudal fin, and smooth, scaleless skin. Sturgeon have 4 whisker-like sensory organs called barbels which help them to sense movement of prey in dark murky waters. As benthic eaters, they suck up shellfish, crustaceans and smaller fish from the seafloor using their extendable, toothless mouths.

Most sturgeons are anadromous bottom-feeders that spend the majority of their lives eating in river deltas and estuaries, migrating upriver only in the spawning season. Certain species inhabit freshwater systems exclusively while others live in coastal marine environments with access to open ocean. Sturgeons are native to subtropical, temperate and sub-Arctic rivers, lakes and coastlines of Europe, Asia and North America.

Sturgeon are one of the most ancient species of fish in the world. They are among the oldest remaining members of the bony fish group (Osteicthyes) with their evolution traceable to the early Triassic Period, nearly 250 million years ago. Sturgeon are referred to as "primitive fishes" because their morphological characteristics have remained relatively unchanged since the earliest fossil record.

Sturgeon are the largest, longest living and slowest growing freshwater/anadromous fish in the world. While some sturgeon species only grow a couple of feet in length, others can get quite large, commonly ranging 7–12 feet and up to 1,000 lbs. The world's largest sturgeon, a female beluga, was almost 3,500 lbs and 24 feet in length. The life expectancy of a sturgeon in the wild is about 60 years, with the oldest specimens on record being at least twice that age. They also mature to adulthood much slower than other fish, taking an average of 10 years before reaching maturity.

Today, sturgeon are one of the most valuable, and unfortunately, critically endangered fish in the world. Their precious eggs are the only ones acceptable for making the "true caviar" delicacy. This expensive luxury food has made sturgeon fish a target for both legal commercial fisheries and illegal poaching operations that look to profit from their valuable roe. Overexpoitation of the sturgeon species has caused the entire Acipenseridae family to be considered at risk of extinction, making them the most critically endangered species group in the world. Because sturgeon have remained unchanged for hundreds of millions of years, they are also particularly vulnerable to the more recent threats of pollution and habitat destruction. With their slow growth rate, it can take many years for sturgeon populations to recover in their wild habitat, and despite a slight resurgence for some species in recent years the family as a whole remains highly threatened.

Paddlefish are closely related to sturgeon, but not technically part of the sturgeon family. Paddlefish and sturgeon have common ancestry dating back 300 million years. Both sturgeon (the Acipenseridae family) and paddlefish (the Polydontidae family) the have the structural traits of primitive fish: scaleless skin, a heterocercal caudal fin, bony features, a cartilaginous endoskeleton, no vertebral centrum, spiral valve intestines and a unique four chamber heart with an infundibulum conical pouch (conus arteriosus).

Instead of scutes and barbels, paddlefish developed a bony skull and long paddle-like snout. Most of their head and rostrum are covered in electroreceptors that help locate food. Having poor vision, paddlefish use a series of sensory pores extending from their gills to the tip of their snout for detecting movement of prey and navigating the depths of muddy rivers. Their bills are equipped with ampulla hair cells that can pick up electrical signals from even the smallest marine creatures. While Chinese paddlefish have a protruding mouth, eating fish and bottom-dwelling prey like most sturgeon, American paddlefish are filter feeders with diets consisting of mostly zooplankton, small insects, larvae, and juvenile fish.

Paddlefish, sturgeon, and African bichirs and reedfish, are the three oldest species of ray-finned fish (Actinopterygii) in the world. These "relic fish" and others such as bowfin, gar, lung fish and certain shark species exhibit the same physiological traits of their ancestors from the Mesozoic Era.

Paddlefish and sturgeon are the only remaining Acipenseriformes, and are some the last Chondrostean fish on our planet. Sturgeon, paddlefish and a vast number of relatives from the Chondrostei suborder dominated water systems during the Triassic and early Jurassic Period with some of the greatest diversity of any species group at the time. Almost all of the Chondrosteans were extinct by the late Cretaceous Period; the only survivors being paddlefish, sturgeon and bichir.

Much like sturgeon and bichir, paddlefish have remained practically unchanged for the past 70 million years. This, along with the rising value of paddlefish meat and roe in specialty markets, has caused wild paddlefish populations to suffer the same modern threats (overexploitation and environmental collapse) that so endangered wild sturgeon populations.

How many sturgeon and paddlefish species are left in the world today?

There are 27 species of Acipenseriformes alive today. This is made up of 2 paddlefish species and 25 true sturgeon species; about 9 species of sturgeon and 1 species of paddlefish are native to North America. The exact number of sturgeon, sturgeon subspecies and sturgeon hybrids surviving in their natural habitats remains unknown. The IUCN believes that 85% of the Acipenseridae family faces critical endangerment and up to 4 species may already be extinct.

The table below shows all accepted species and subspecies for a total of 28 different sturgeon: Acipenser baerii (Siberian) is separated into 3 subspecies, Acipenser oxyrinchusas is separated into 2 subspecies, and Acipenser multiscutatus (Japanese) was removed for being synonymous with Acipenser schrenckii (Amur) commonly accepted as the same fish. Since it is difficult to get exact data on how many fish from each species exist in the wild, the endangerment levels from the IUCN are sometimes scrutinized for inaccuracy. Across the globe today, less than half of the 26 sturgeon species are commercially fished or farmed for their caviar. Even in this modern age, with most sturgeon caviar coming from the farm-raised fish roe of only 10 to 12 different species, the majority of the Acipenseridae family is at a risk of extinction in the wild. Only in regions where sturgeon species are properly regulated and protected from man-made threats do they start to make their slow recovery. 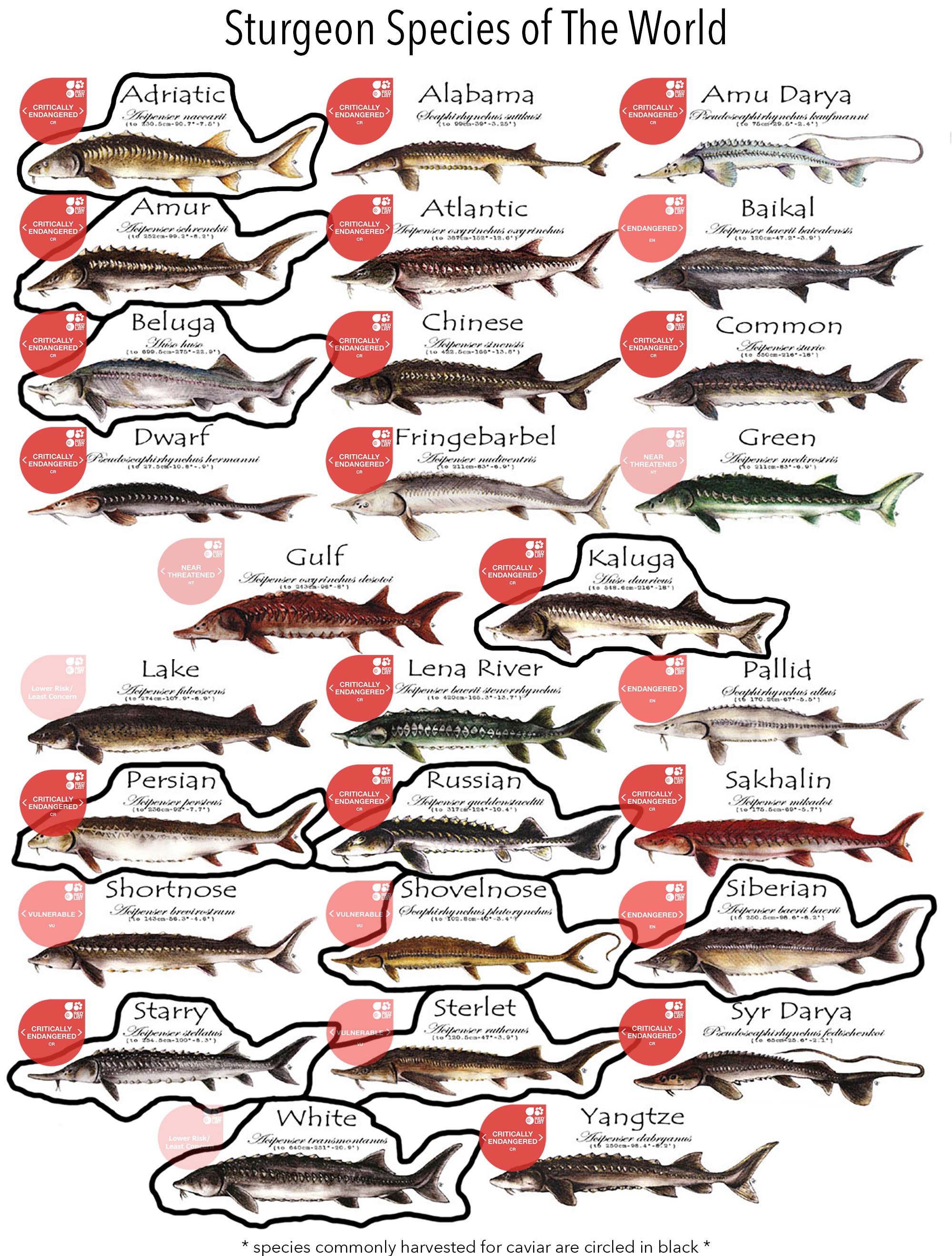 The two remaining closely related non-sturgeon species, Polyodon spathula (American paddlefish) and Psephurus gladius (Chinese paddlefish) are also at risk of extinction. The American paddlefish population, listed as "vunerable", has benefited from U.S. regulation and sustainable fishing practices in recent decades. The "critically endangered" Chinese paddlefish however did not get similar protections, has not been seen in the wild for a decades and is thought to be extinct. Fossil records indicate that another 4 different paddlefish species have gone extinct in the last era.

Out of the estimated 25 remaining wild sturgeon species and 2 wild paddlefish species, not a single one has been conclusively listed as having a stable population. Looking to the future, many scientists and government officials are working hard to protect local Acipenseriformes so their numbers can increase and their extinction can be prevented.

Learn more about all the sturgeon and paddlefish species here.